At enko, every day is an opportunity to develop safer and more effective solutions for agriculture. Our values guide us to meet the demands of the next generation of food production.
To accomplish this, we strive for: 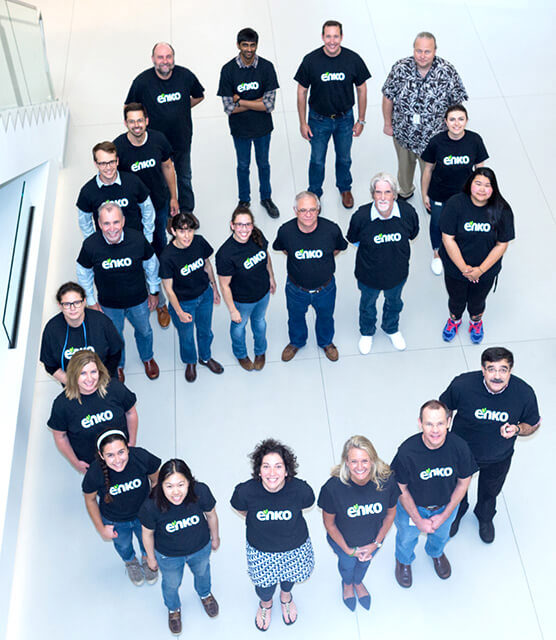 Excellence in everything we do

Our rigorous approach to research, our meticulous focus on safety, and our dedication to efficiency – this is what enables us to accelerate discovery

We’re excited to breathe new life into an industry badly in need of innovation.  Our new methods, applications, and creativity propel us toward success

Our commitment to having a positive impact on health, safety, and the environment includes cultivating an open, supportive, and respectful team. We are each challenged to seek new opportunities for the company, and our own individual growth.

JACQUELINE HEARD, CEO Jacqueline is the founder and CEO of Enko and a Venture Partner at Anterra Capital. She has a Ph.D. in Biology from Boston College and an MBA from MIT Sloan. Her career in agriculture has centered around the support of innovation in the sector by identifying and commercializing new technology, both as an entrepreneur at start-ups like CiBO Technologies and Mendel Biotechnology, and as a leader of global R&D and investments at Monsanto, Flagship, and Two Blades Foundation. She was instrumental in starting Monsanto Growth Ventures, setting up the corporate venture arm of a world-leading agritech firm. Jacqueline has served as an active Board member for her portfolio companies and forged new open innovation structures for the industry by creating new companies like Nimbus Ceres Discovery and Preceres to develop novel Fungicide and RNA formulation assets using capital-efficient, semi-virtual models.

TOM MEADE, CSO Tom has over 21 years of experience working in the agriculture industry with a focus on the discovery of novel crop protection traits and chemistries.  He began his career at Mycogen discovering insect resistance traits and broadened his scientific and leadership responsibilities to include insecticide discovery when Mycogen was acquired by Dow. Tom made direct contributions to many successful discovery efforts during his tenure at Mycogen and Dow AgroSciences that resulted in commercial traits (WideStrikeâ cotton, Herculexâ corn, and Conkestaä soy) and an insecticide (Isoclastâ active).  Through leadership positions in both crop protection chemistry and traits he has broad experience in the discovery and development process.  Tom was most recently the Global Leader for Trait Discovery at Dow AgroSciences before accepting the position of CSO for Enko Chem Inc.

ANDREW PLANT, PH.D. Andrew has almost 30 years’ experience in research and development in the crop protection and animal health industries. He received a B.Sc in Chemistry from the University of Liverpool, UK and a Ph.D in synthetic heterocyclic chemistry from the same institution. He conducted postdoctoral research at the Technical University in Aachen, Germany, before joining Central Research at Bayer AG. A major focus of his work has been new active ingredient invention, especially herbicides, insecticides and parasiticides. Andrew has held various leadership roles, including Head of Research Chemistry at Syngenta, Head of Lawn & Garden R&D at Syngenta, and Director Drug Discovery at MSD Animal Health. He is currently Chief Technology Officer at AgriMetis. Andrew has more than 70 patent applications and publications.

TERENCE WALSH, Ph.D. Terry has over 35 years career experience in ag biotechnology and agrochemical discovery research. He received a BSc from King’s College, London, UK and a PhD in Biochemistry from the University of East Anglia, Norwich, UK. He conducted postdoctoral research at the University of Michigan, Ann Arbor before joining Central Research at The Dow Chemical Company. His industrial career has primarily focused on agricultural product R&D, first at Dow then transitioning into DowElanco, Dow AgroSciences and DowDuPont. He established a strong track record in ag biotech trait discovery and development, ag chemistry discovery and molecular target site characterization. Terry led teams and collaborations that: produced the omega-3 long chain polyunsaturated fatty acid DHA in canola by expression of a unique microalgal megasynthase enzyme system; biochemically characterized the novel activity of the aryloxyalkanoate dioxygenase enzymes that are the basis of the new Corteva Agrisciences herbicide resistance trait for corn, soybean and cotton, Enlist®; and discovered the target site receptor for picolinate auxins, a major class of herbicides that includes the new Corteva herbicides Arylex® and Rinskor®. Terry retired from DowDuPont as a Research Fellow in 2018 and is now an independent consultant. He was an associate editor of Weed Science and has over 30 journal publications and 17 issued US patents.

STEPHEN POWLES, Ph.D. Stephen Powles received his Master’s Degree in Crop Science from Michigan State University and his Ph.D. in Plant Biology from The Australian National University. Stephen is a Professor Emeritus at the University of Western Australia. Powles founded and served for 20 years as Director of the Australian Herbicide Resistance Initiative. He is an internationally recognized authority on all aspects of herbicide resistance where he has worked for almost three decades, leading the world-class research team. His expertise ranges from the fundamental science on the evolution and molecular basis of herbicide resistance through to applied agronomic research and management. Prof Powles has strongly influenced Australian and international thinking on sustainable herbicide usage by reducing herbicide reliance and increasing diversity in agro-ecosystems. He is a Fellow of the Australian Academy of Science and the Australian Academy of Technological Science & Engineering and has published close to 200 papers in international research journals. Among his many accomplishments, his honors include the Centenary Medal by the Australian Government for his contributions to society and the GRDC Seed of Light award for his research and communication with Australian grain growers.

TIMOTHY PASTOOR, Ph.D., DABT, ATS Dr. Pastoor obtained his PhD in toxicology from the University of Michigan, is certified by the American Board of Toxicology (DABT) and is a Fellow of the Academy of Toxicological Sciences (ATS). Dr. Pastoor retired in 2015 from Syngenta as Principal Scientist and founded the company Pastoor Science Communications, LLC that is centered around his passion for sound science, communicated well and continues to provide regulatory and toxicological guidance in product development. He is also past president of the Health and Environmental Sciences Institute (HESI) and is a Board member of several small biotechnology start-up companies as well as the American Council on Science and Health (ACSH). Dr. Pastoor has nearly 40 years of international experience in fundamental toxicity testing, mode of action research, and human health risk assessment.   For most his career, including positions with DuPont, ICI, Zeneca, Novartis, and Syngenta, Dr. Pastoor led toxicology and risk assessment experts in the conduct of safety, health, and environmental studies to assess risk to humans and the environment. In those roles, he was involved in toxicological research projects and product development and was frequently asked to interact with media, community groups, legislators, and regulatory agencies.  He is a frequent lecturer on toxicology and risk assessment subjects. In his “retirement” Dr. Pastoor has remained actively engaged in science, toxicology, risk assessment, and science communication. He is also finding time to help the University of North Carolina develop the Professional Science Masters program in toxicology.  As founder and CEO of Pastoor Science Communications and through his role as HESI president, he is leading global groups from academia, government, and corporations in developing consensus on difficult scientific issues.

ARTEM EVDOKIMOV, Ph.D. Artem Evdokimov studied synthetic organic chemistry as an undergrad in Kiev, Ukraine, and received his Masters and Doctorate in structural biology/protein biochemistry and biophysics from the Weizmann Institute of Science in Israel. His career followed a sinusoidal path from pharma to agricultural biotechnology, with notable stops at Procter & Gamble Pharmaceuticals, Pfizer, and Monsanto, where he made contributions in the discovery of two late-stage clinical candidates as well as several transgenic plant traits. Artem's expertise is split between discovery of small molecules for pharma and ag-biotech and the design of proteins with useful characteristics (in particular for insect control and herbicide resistance). He is deeply passionate about protein biochemistry and is an expert at building and leading effective cross-functional teams. He has over fifty peer-reviewed articles and more than fifteen granted US and World patents.

PAT CONFALONE, Ph.D. A graduate of M.I.T., Pat obtained a Ph.D. at Harvard with Nobel laureate Prof. R.B. Woodward. After a post-doctoral stint, also with Prof. R.B. Woodward, directed toward the total synthesis of Vitamin B12, he joined the Chemical Research Department of Hoffmann-La Roche. Moving to DuPont, Pat’s career accomplishments included impacts on the development of pharmaceutical products including the fluorescent dye-labeled reagents that were used in automated DNA sequencing, Cozaar™, a major anti-hypertensive based on angiotensin II antagonism and Sustiva™, a highly successful medicine used to treat AIDS. As Vice President, Global R&D, DuPont Health, Nutrition, and Crop Protection, he led 300 scientists to build a world class pipeline of novel products, including Rynaxypyr™, with world-wide sales over a billion dollars a year. He has published >140 papers, obtained >50 U.S. Patents, and has been an associate editor of over ten peer-reviewed scientific journals. He has received numerous honors and awards, including the Harvard Graduate Society Prize, the Alpha Chi Sigma Award, the Robert A. Welch Lectureship, and the Philadelphia Organic Chemistry Award. He was nominated to the Harvard Society of Fellows, is an elected Fellow of the American Association for the Advancement of Science, and was elected Chairman of the Board of the American Chemical Society. Currently, Pat is an independent consultant to the agrichemical, biotechnology, and pharmaceutical industries.

At enko, our fellow team members inspire us to work toward our goals in achieving safer, more targeted, crop protection options. Each member of our team contributed to this word map to capture the spirit of enko. Each word is a symbol of who we are and what we stand for.

Are you sure to discard changes?

Which Type of news do you want to add?

Are you sure to save changes?

Are you sure to remove member?

Do you want to remove the employee block?

Are you sure you want to remove this news block?

Thanks for contacting us. We will get back in touch with you soon!